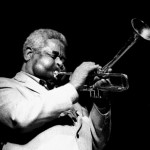 Gillespie was born October 21, 1917 in Cheraw, South Carolina. By the age of four, he had started to play the piano. He also taught himself to play the trombone and the trumpet. His first professional job was with the Frank Fairfax Orchestra in 1935 and in 1939 he joined Cab Calloway’s orchestra. During this time, Gillespie also started writing big band music for other bands.

In 1944, Gillespie put together his first big band and in the late 1940s he was instrumental in the Afro-Cuban music movement, bringing Latin and African elements to greater prominence in jazz. His most famous Afro-Cuban compositions are “Manteca” and “Tin Tin Deo.” In 1956, Gillespie organized a band to go on a State Department tour of the Middle East, earning the nickname “the Ambassador of Jazz.” Gillespie was inducted into the Down Beat Jazz Hall of Fame in 1960 and was named a NEA Jazz Master, the highest honor bestowed on a jazz musician by the United States, by the National Endowment for the Arts in 1982.

In 1989, Gillespie gave 300 performances in 27 countries and 31 states, headlined 3 television specials, performed with 2 symphonies, and recorded 4 albums. Also that year, he received the Commandeur de l’Ordre des Arts et des Lettres, France’s most prestigious cultural award, the Grammy Lifetime Achievement Award, and was awarded the National Medal of Arts, the highest honor bestowed on an individual artist by the United States, by President George H. W. Bush. In 1990, Gillespie received the Kennedy Center Honors Award. Gillespie published his autobiography, “To Be or Not to Bop: Memoirs of Dizzy Gillespie,” in 1979.