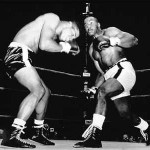 Liston was born May 8, 1932 in Johnson Township, Arkansas. In 1950, he was sentenced to prison for taking part in a robbery and while in prison learned to box. Liston was paroled in 1952 and made his professional boxing debut in 1953. In 1962, he won the World Heavyweight Championship by knocking out Floyd Patterson.

In 1964, Liston lost the title to Cassius Clay (Muhammad Ali) but he continued to box until June, 1970. He retired with a career record of 50 wins and 4 losses. Liston was posthumously inducted into the International Boxing Hall of Fame in 1991. Biographies of Liston include “The Devil and Sonny Liston” (2000) and “Sonny Liston: His Life, Strife and the Phantom Punch” (2008). A feature film about his life, “Phantom Punch,” was produced in 2008.