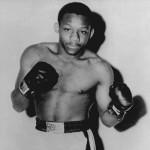 Perkins started boxing professionally in 1956 and was willing to fight anyone anywhere. Over his career, he fought in 23 countries and Puerto Rico. Perkins won the World Lightweight championship in 1962, lost it later that year, and regained the title in 1963. He successfully defended the title twice before losing it for a final time in 1965.