By Chimsima Zuhri on February 25, 2011 in African American History, February 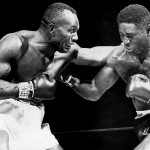 Over his 23 year professional boxing career, he had a record of 51 wins, 18 losses and 2 draws. After retiring, Walcott worked as a boxing referee and in 1972 became Sheriff of Camden County. From 1975 to 1984, he served as Chairman of the New Jersey State Athletic Commission. In 1990, Walcott was inducted into the International Boxing Hall of Fame.