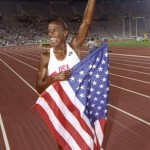 In 1986, Joyner-Kersee received the James E. Sullivan Award as the top amateur athlete in the country and in 2001 she was voted the Top Woman Collegiate Athlete of the Past 25 Years. Sports Illustrated for Women magazine voted her the Greatest Female Athlete of the 20th Century. In 1988, Joyner-Kersee founded the Jackie Joyner-Kersee Foundation which provides youth, adults and families with resources to improve the quality of their life. Joyner-Kersee published her autobiography, “A New Kind of Grace,” in 1997.