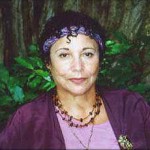 Hamilton earned her Bachelor of Arts degree from Ohio State University in 1958 and published her first book, “Zeely,” in 1967.

Over her career, she wrote over 35 books, including “M. C. Higgins, the Great” which won the National Book Award in 1974 and the 1975 Newbery Medal, a first by an African American author. Her 1983 book “Sweet Whispers, Brother Rush” was awarded a Boston Globe- Horn Book Award. Additionally, Hamilton received the Edgar Allan Poe Award, the Coretta Scott King Award, and she was the first American to receive the Hans Christian Anderson Award. The Virginia Hamilton Conference on Multicultural Literature for Youth has been held annually at Kent State University since 1984. Hamilton died February 19, 2002.