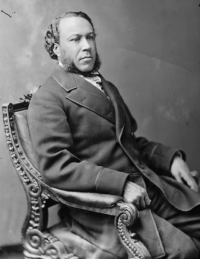 June 21, in 1832, Joseph Hayne Rainey was born a slave in the rice-growing region of Georgetown, South Carolina.

1832 was a tumultuous time for race relations in America. The Nat Turner Rebellion of August 1831, in which a slave preacher led a band of enslaved men on a killing spree in Virginia, still caused anxiety among southerners. Only twenty-three days following the birth of Joseph Hayne Rainey, President Andrew Jackson signed the Tariff of 1832. This bill created heated debate in South Carolina among politicians over the issue of nullification, the belief that the state could defy federal laws. Many consider this debate the opening salvo in the impending Civil War. South Carolina would become the first state to leave the nation and the site of the first shots fired. That Rainey, born in the midst of the rancor, would emerge from this Civil War to become the first African American to serve in the U.S. House of Representatives is only fitting.

Though enslaved, the Rainey family was relatively more fortunate than were others. Edward L. Rainey, the father, possessed skills as a barber. Using the money he earned when not working for his owner, Edward purchased the freedom of his wife Gracia, himself and Joseph in 1846. The family then moved from Georgetown to the bustling port of Charleston, where Edward earned enough money to buy two slaves of his own. Meanwhile, Joseph, also a barber, found work at the upscale Mills House Hotel.

On a trip to Philadelphia in 1859, Joseph Hayne Rainey met and married his wife, Susan. They returned to live in South Carolina as the nation continued to drift toward the Civil War. When the war began, Joseph, as was common practice, got impressed, or forced, into service on a Confederate Army labor gang. In this position, he built fortifications and served food to the men. To escape this lot, Joseph and Susan stowed away on a ship headed to Bermuda in 1862. In Bermuda, Joseph worked again as a barber. The war over, he and Susan returned home to Charleston to begin life anew in 1866.

Rainey began his career as a politician in 1868 when Georgetown, South Carolina, chose him to represent the populace at the state Constitutional Convention that year. This was the Reconstruction period, which lasted from the end of the war in 1865 to 1877. During Reconstruction, the nation attempted to rebuild the South and to define the meaning of freedom for African Americans. The majority of African American men enjoyed the right to vote for the first time in this era.

With a degree of wealth acquired in Bermuda and the respect of his neighbors, Rainey ran for elective office, winning a seat, as a Republican, in the South Carolina House of Representatives in 1870. He headed the congressional finance committee during his tenure. In February of 1870, U.S. Congressman Benjamin F. Whittemore resigned in scandal, leaving an open spot from the state of South Carolina. The Republican Party appointed Rainey as a replacement in the U.S. Congress, where he joined Hiram Revels of Mississippi, who was the first black senator. Rainey went on to serve a total of five terms in the House of Representatives, finally leaving Washington on March 3, 1879. In Congress, Rainey served on the Committee for Freedmen’s Affairs, which was responsible for creating laws to protect the rights of the newly freed African American population.

Back home in South Carolina, Rainey spent two years serving as an agent in the U.S. Treasury Department office from 1879 to 1881. He and Susan were operating a millinery shop in Georgetown when Rainey died of congestive fever on August 1, 1887.