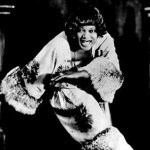 Smith was born on April 15, 1894 in Chattanooga, Tennessee. In 1912, she was hired as a dancer with the Moses Stokes troupe which included Ma Rainey. By the early 1920s, Smith had starred with Sidney Bechet in “How Come?,” a musical that made its way to Broadway, and she had become the biggest headliner and highest paid entertainer on the Black Theater Owners Association circuit.

In 1923, Smith was signed by Columbia Records as part of their “race records” series and she scored a hit with her first release “Downhearted Blues” which sold 780,000 records in the first six months after release. The recording was included by the National Recording Preservation Board in the Library of Congress’ National Recording Registry in 2002 as “culturally, historically, or aesthetically significant.” It is also in the Rock and Roll Hall of Fame as one of the 500 Songs That Shaped Rock and Roll.

In total, Smith made 160 recordings for Columbia. In November, 1933, Smith made her last recordings which included “Take Me for a Buggy Ride” and “Gimme a Pigfoot,” both of which remain among her most popular recordings. Smith was posthumously inducted into the Down Beat Jazz Hall of Fame in 1967. In 1989, she was awarded a Grammy Lifetime Achievement Award and inducted into the Rock and Roll Hall of Fame.

In 1994, the United States Postal Service issued a commemorative postage stamp in her honor. Smith’s life is the subject of the play “The Devil’s Music: The Life and Blues of Bessie Smith.”