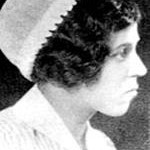 Franklin was born October 29, 1870 in New Milford, Connecticut. She graduated from the Women’s Hospital Training School in 1897, the only black graduate in her class, and in the early 1900s moved to New Haven, Connecticut. After two years of investigating the nursing field, she determined that although black nurses could join the American Nurses Association they were restricted from addressing the issues of segregation and discrimination.

As a result on August 25, 1908, Franklin hosted a meeting of 52 black nurses that resulted in the founding of the National Association of Colored Graduate Nurses with Franklin as president. The NACGN grew to an organization of 12,000 members from almost every state in the nation. By 1951, most of the groups aspirations had been met and they merged with the American Nurses Association. Franklin continued with her education and became a registered nurse with the New York Public School System.

In 1976, Franklin was posthumously inducted into the American Nurses Association Hall of Fame as one of the pioneers of the nursing field.