By Chimsima Zuhri on February 23, 2011 in African American History, February 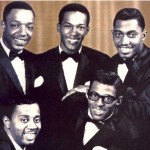 Born David Melvin English on October 12, 1942 in Montgomery, Alabama, his family moved to Detroit, Michigan when he was nine. Franklin took his mother’s maiden name as his stage name and sang with a number of local groups. In 1960, he joined The Elgins and in 1961 they were signed by Motown and their name changed to The Temptations.

Franklin performed with the group from then until 1994 and his deep vocals became one of the group’s signature trademarks. Franklin sang lead on a few songs including “I Truly, Truly Believe” (1968), “Silent Night” (1970), and “Ol Man River.” Franklin was inducted, along with five other members of The Temptations, into the Rock and Roll Hall of Fame in 1989.