By Chimsima Zuhri on February 24, 2011 in African American History, February 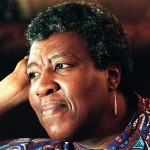 Butler was born June 22, 1947 in Pasadena, California. She began writing at the age of 10 and at 12 began a lifelong interest in science fiction. In 1968, she earned an associate’s degree from Pasadena City College and then participated in a number of writing workshops. Her first published short story, “Crossover,” appeared in 1971.

In 1995, she became the first science fiction writer to receive the MacArthur Foundation “Genius” Grant. The Octavia E. Butler Memorial Scholarship was established in 2006 to provide an annual scholarship for writers of color to attend one of the writing workshops where Butler got her start. In 2010, Butler was posthumously inducted into the Science Fiction Hall of Fame.