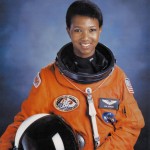 October 17, 1956 Mae Carol Jemison, physician and the first African American woman to travel in space, was born in Decatur, Alabama.

Jemison entered Stanford University at the age of 16 and graduated in 1977 with a Bachelor of Science in Chemical Engineering and a Bachelor of Arts in African and Afro-American Studies. She earned her Doctor of Medicine degree in 1981 from Cornell Medical College.

After completing her medical internship, she joined the Peace Corp and served as a Medical Officer in Liberia and Sierra Leone from 1983 to 1985. In 1987, Jemison was accepted into the training program of the National Aeronautics and Space Administration (NASA) and on September 12, 1992 traveled in space aboard the Space Shuttle Endeavour. Jemison resigned from NASA in 1993 and started her own company that researches, markets and develops science and technology for daily life.

Jemison is a long-time advocate for science education and getting minority students interested in science. She has received nine honorary doctorates and in 1992 the Mae C. Jamison Academy, an alternative school in Detroit, was named in her honor. In 1993 she was inducted into the National Women’s Hall of Fame and in 2004 she was inducted into the International Space Hall of Fame.

In 2003, Jemison was the scholar at the Ford Freedom Awards when General Daniel “Chappie” James, Jr.’s name was enshrined in the Ring of Genealogy at the Charles H. Wright Museum of African American History in Detroit, Michigan.