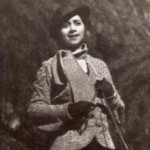 Evans was born August 12, 1891 in Washington, D.C. A gifted student and performer, she could speak and sing in five different languages and earned her bachelor’s degree in music from Howard University.

Evans, a lyric soprano, began singing professionally in 1918 under the stage name Evanti. She moved to France in 1925 where she became the first African American woman to sing with a European opera company. In 1934, she gave a special command performance for President Franklin D. Roosevelt. In 1941, she and Mary Caldwell Dawson created the National Negro Opera Company to provide a venue for African American performers. Over her career, Evanti performed in 24 operas.