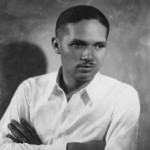 Duncan was born February 12, 1903 in Danville, Kentucky. He earned a Bachelor of Arts degree in music from Butler University and a Master of Arts degree from Columbia University Teachers College. In 1933, he debuted in New York City with the Aeolian Opera, a black opera company. In 1935, Duncan originated the role of Porgy in “Porgy and Bess” and played the role more than 1,800 times.

In 1936, he led the cast in protesting the policy of segregation at the National Theater in Washington, D. C. Duncan stated that he “would never play in a theater which barred him from purchasing tickets to certain seats because of his race.” Eventually theater management gave in and allowed integrated seating for the first time. In 1945, Duncan became the first African American to sing with a major opera company when he performed with the New York City Opera.

Duncan also had a successful career as a concert singer with over 2,000 performances in 56 countries. Duncan taught voice at Howard University for more than 50 years and after retiring opened his own voice studio. In 1984, he was awarded the George Peabody Medal of Music from the Peabody Conservatory of Music at John Hopkins University.