By Chimsima Zuhri on February 21, 2011 in African American History, February 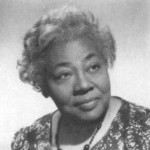 Jessye was born January 20, 1895 in Coffeyville, Kansas. She studied choral music and music theory at Western University, a now defunct historically Black college, and earned a Bachelor of Arts degree from Langston University in 1919. In 1926, she formed her own group, the Eva Jessye Choir. Jessye was the choral director for the 1929 film “Hallelujah.”

An active supporter of the Civil Rights Movement, Jessye directed the official choir at the 1963 March on Washington for Jobs and Freedom. Before her death, Jessye established the Eva Jessye African-American Music Collection at the University of Michigan.