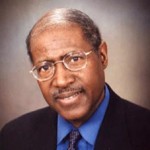 Walters was born July 20, 1938 in Wichita, Kansas. In 1958, as president of the Wichita NAACP Youth Council, he organized the Dockum Drug Store sit-in which led to the desegregation of drugstores in Wichita. Walters earned his Bachelor of Arts degree with honors in history and government from Fisk University in 1963 and both his Master of Arts in African studies and Ph.D. in international studies from American University in 1966 and 1971, respectively.

Walters served as professor and chair of the political science department at Howard University for 25 years and for 13 years, until his retirement in 2009, was director of the African American Leadership Institute at the University of Maryland. Walters also served as campaign manager for Jesse Jackson during his 1984 and 1988 presidential bids. Walters published a number of books, including “Black Presidential Politics in America: A Strategic Approach” (1988) which won the Bunche Prize.

Other books by Walters include “Standing Up in America’s Heartlands: Sitting in Before Greensboro” (1993) and “White Nationalism, Black Interests: Conservative Public Policy and the Black Community” (2003).