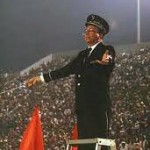 When Foster became director of the band in 1946, the school was known as the Florida Agricultural and Mechanical College for Negroes. He introduced over 30 new techniques to the band which have become standard procedures for high school and college bands nationwide. In 1989, France chose the Florida A&M band as America’s official representative in the Bastille Day Parade celebrating the Bicentennial of the French Revolution. In 1992, Sports Illustrated Magazine declared the Florida A&M band the best marching band in the country.

Foster retired in 1998 and was the first recipient of the United States Achievement Academy Hall of Fame Award. Also in 1998, he was elected to the National Band Association Hall of Distinguished Band Conductors, the most prestigious honor a bandmaster can receive. Foster authored “Band Pageantry: A Guide for the Marching Band” and “The Man Behind the Baton.”