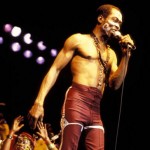 Fela was born Olufela Olusegun Oludotun Ransome-Kuti on October 15, 1938 in Abeokuta, Nigeria. In 1958, Fela was sent to London to study medicine, but decided to study music instead at the Trinity College of Music. In 1963, he moved back to Nigeria and formed a band. In 1969, Fela took the band to the United States where he discovered the Black Power Movement.

After returning to Nigeria, his music became more politically motivated. His music was popular among the Nigerian public and Africans in general, but unpopular with the ruling government. In 1977, Fela released the album “Zombie” which was an attack on the Nigerian military. The album was a smash hit with the public, but resulted in an attack by Nigerian soldiers in which Fela was severely beaten and his mother was killed. In 1979, Fela formed his own political party, Movement of the People, and put himself up for president in Nigeria’s first elections in more than a decade.

His candidacy was refused by the government. In 1984, Fela was jailed by the government for 20 months and in 1989 Fela released the anti-apartheid album, “Beasts of No Nation.” More than a million people attended Fela’s funeral. In 2009, a production of his life titled “Fela!” opened on Broadway and continues to tour around the world.