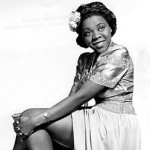 Washington was born Ruth Lee Jones on August 29, 1924 in Tuscaloosa, Alabama. As a child, Washington played the piano and directed her church choir and by 16 she was touring the United States on the black gospel circuit. During this period, she performed in clubs as Dinah Washington while performing as Ruth Jones on the gospel circuit.

Between 1948 and 1955, she had numerous R&B hits, including “I Won’t Cry Anymore” (1951), “Trouble in Mind” (1952), and “Teach Me Tonight” (1954). In 1959, Washington won the Grammy Award for Best Rhythm and Blues Performance for “What a Difference a Day Makes.” In 1960, she teamed up with Brook Benton for “Baby (You’ve Got What It Takes)” and “A Rockin’ Good Way (To Mess Around and Fall in Love).” Washington was one of the most influential vocalists of the twentieth century and is credited as a major influence on Aretha Franklin. Three of her recordings, “Teach Me Tonight” (1954), “Unforgettable” (1959), and “What a Difference a Day Makes” (1959) have been inducted into the Grammy Hall of Fame as having “qualitative or historical significance.”