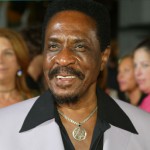 Turner was born November 5, 1931 in Clarksdale, Mississippi. His music career began in the late 1940s when he formed a group called The Kings of Rhythm. In 1951, the band recorded “Rocket 88” which many historians recognize as the first rock and roll record. While playing with the band, Turner also played guitar as a sideman for blues acts such as Howlin’ Wolf and Otis Rush.

In 1956, he met a teenage singer named Anna Mae Bullock whose name he changed to Tina Turner and the name of the band became the Ike & Tina Turner Revue. In early 1960, they recorded “A Fool in Love,” which became a national hit, reaching number 2 on the R&B charts. From then until 1976, they were one of the most explosive duos in rock and soul music, recording singles such as “It’s Gonna Work Out Fine” (1961), “Proud Mary” (1971) and “Nutbush City Limits” (1973).

After Tina left, Ike struggled as a solo act until 2001 when he released the Grammy Award nominated “Here & Now” album. In 2007, he won his first solo Grammy Award in the Best Traditional Blues Album category for “Risin’ with the Blues.” Ike and Tina were inducted into the Rock and Roll Hall of Fame in 1991.