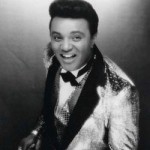 Wilson was born June 9, 1934 in Detroit, Michigan. He gained early fame as a member of The Dominoes.