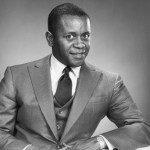 It was the first prime time variety show starring an African American male since the “Nat King Cole Show” in 1957. It was also the first television program starring a Black person to become highly successful with a White audience.

During its first two seasons, the show was the second most watched television show. Wilson was most famous for creating the roles of Geraldine Jones, a sassy modern woman, and Reverend Leroy, the minister of the Church of What’s Happening Now. He also popularized the phrases “What you see is what you get” and “The devil made me do it.”

In addition to the skits, Wilson provided television exposure for many African American entertainers. The show was cancelled after 94 episodes on June 27, 1974.