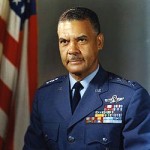 After attending the University of Chicago, Davis entered the United States Military Academy at West Point in 1932. Despite shunning by his classmates, never having a roommate, and being forced to eat alone, he earned his Bachelor of Science degree in 1936, becoming the fourth black graduate from the academy.

In 1941, he was assigned to the first training class at Tuskegee Army Air Field and in 1942 became the first officer to earn his wings there. During World War II, the airmen commanded by Davis compiled an outstanding record in combat, flying more than 15,000 sorties, shooting down 111 enemy planes, and destroying or damaging 273 planes on the ground. After the war, Davis served at the Pentagon and in overseas posts for the next 20 years before retiring from active military service in February, 1970 as a lieutenant general.

Davis published his autobiography, “Benjamin O. Davis, Jr.: American,” in 1991 and in December, 1998 he was advanced to the rank of General, United States Air Force, with President William Clinton pinning on his four-star insignia. Davis died July 4, 2002.