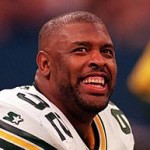 Over the next fifteen seasons, White was a 12-time All-Pro selection and in 1987 and 1998 was the NFL Defensive Player of the Year. Because of his strong Christian beliefs and his play on the field, White was known as “the Minister of Defense.” After retiring from football, White served as an associate minister at a church in Knoxville, Tennessee.

White died December 26, 2004. During the 2005 football season the University of Tennessee, Philadelphia Eagles, and Green Bay Packers all retired White’s uniform number and in 2006 he was posthumously inducted into the Pro Football Hall of Fame. Reggie White Boulevard in Chattanooga and Reggie White Way in Green Bay, Wisconsin are named in his honor.