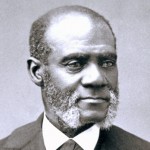 February 12, 1865 Henry Highland Garnet became the first black minister to preach to the United States House of Representatives when he spoke about the end of slavery.

Garnet was born enslaved on December 23, 1815 near New Market, Maryland. In 1824, his family escaped to freedom in Philadelphia, Pennsylvania.

They subsequently moved to New York City where from 1826 to 1833 he attended the African Free School and the Phoenix High School for Colored Youth. Garnet went on to graduate with honors in 1839 from Oneida Theological Institute of Whitesboro. He later joined the American Anti-Slavery Society and frequently spoke at abolitionist conferences. He delivered one of his most famous speeches, “Call to Rebellion,” in August, 1843 to the National Negro Convention.

In that speech, he called for the enslaved to act for themselves to achieve total emancipation. By 1849, Garnet began to support emigration of blacks to Mexico, Liberia, or the West Indies and he founded the African Civilization Society. After the Civil War, Garnet was appointed president of Avery College in 1868 and in 1881 he was appointed U.S. Minister to Liberia. Garnet died February 13, 1882 and Henry Highland Garnet School for Success in Harlem, New York and the HHG Elementary School in Chestertown, Maryland are named in his honor.