By Chimsima Zuhri on October 14, 2011 in African American History, October 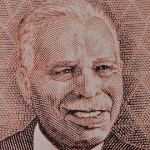 In 1948, Davis became the first African American to become a tenured professor at a major white university when he joined the Department of Education at the University of Chicago. Davis was known for groundbreaking field studies such as “Children of Bondage” (1940) and “Deep South” (1941) which used anthropological techniques to explore how race and social class influence education and learning among children.

Davis died November 21, 1983 and, in 1994, the United States Postal Service issued a commemorative stamp in his honor.