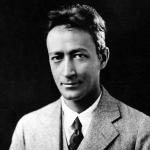 Toomer was born December 26, 1894 in Washington, D. C. Toomer attended six institutions of higher education between 1914 and 1917, studying agriculture, fitness, biology, sociology, and history but never earned a degree. After college, he published some short stories and served as principal of a school in Georgia.

In 1923, Toomer published “Cane,” a series of poems and short stories about the black experience in America. Critics hailed it as an important work of the Harlem Renaissance. The years between 1925 and 1935 were the most productive of Tommer’s literary career. In 1927, he completed the novel “The Gallonwerps” and the play “The Sacred Factory.”

In 1931, his long poem, “The Blue Meridian,” dramatically foreshadowed the racial discourse of the 21st century. Toomer stopped writing after 1950. His biography, “The Lives of Jean Toomer: A Hunger for Wholeness,” was published in 1987.