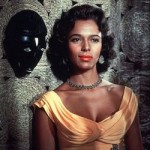 singer and actress, was found dead from an overdose of antidepressants. Dandridge was born November 9, 1922 in Cleveland, Ohio. As a young child, she and he sister rarely attended school and toured the South with an act called The Wonder Children. Dandridge first appeared on screen in 1935 and in 1937 she appeared in the Marx Brothers feature “A Day at the Races”.

Dandridge initially gained fame because of her singing ability and as a solo performer in nightclubs around the country. In 1954, Dandridge was cast in the lead of “Carmen Jones” which was a commercial success and resulted in her being nominated for the 1955 Academy Award for Best Actress. She was the third African American to be nominated for an Oscar and the first in the Best Actress category.

In the early 1960s, Dandridge suffered significant financial difficulties and alone and without any singing or acting engagements, suffered a nervous breakdown. In 1999, HBO presented the movie “Introducing Dorothy Dandridge”. Dandridge has a star on the Hollywood Walk of Fame for her contribution to the motion picture industry.