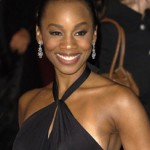 After graduating from Florida A&M University with a Bachelor’s Degree in Theatre, Rose made her professional stage debut in 1998 in “Valley Song”.