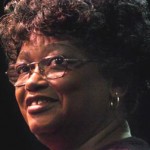 On March 2, 1955 while returning from high school on the bus, Colvin refused to give up her seat to a White person, in violation of local law. As a result, she was removed from the bus by two police officers and taken to jail. At the time, Black leaders were looking for a case to litigate in an effort to overturn the law but because of Colvin’s poor background, they decided to wait until they had a plaintiff who was more upstanding.

Nine months later, Rosa Parks was arrested for refusing to give up her seat on a bus to a White person, resulting in the Montgomery Bus Boycott. Colvin was sentenced to probation and in 1958 moved to New York. She retired in 2004 after 35 years as a nurse’s aide at a Manhattan nursing home.

Colvin’s story was told in the biography, “Claudette Colvin: Twice Toward Justice”, which won the 2009 National Book Award for Young People’s Literature.