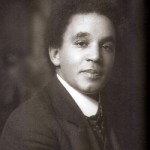 Coleridge-Taylor was born August 15, 1875 in Holborn, London. He studied violin at the Royal College of Music and by 1896 had earned a reputation as a composer. In 1898, he completed his most well known piece, the cantata “Hiawatha’s Wedding-feast”.

Coleridge-Taylor was greatly appreciated by African Americans. In 1901, a 200-voice chorus was founded in Washington, D. C., named the Samuel Coleridge-Taylor Society. In 1904, he toured the United States, resulting in an increased interest in his heritage. He sought to do for African American music what Johannes Brahms did for Hungarian music.

After his death, a memorial concert was held at the Royal Albert Hall. His biography, “The Hiawatha Man: The Life & Work of Samuel Coleridge-Taylor was published in 1995.