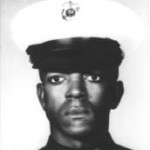 Anderson was born January 22, 1947 in Los Angeles, California and enlisted in the marines in 1966. He was promoted to private first class after graduating from recruit training and sent to Vietnam.

On February 28, 1967, he was mortally wounded when according to his citation: “an enemy grenade landed in the midst of the Marines and rolled alongside Private First Class Anderson’s head. Unhesitatingly and with complete disregard for his own personal safety, he reached out, grasped the grenade, pulled it to his chest and curled around it as it went off.

Although several Marines received shrapnel from the grenade, his body absorbed the major force of the explosion. In this singular heroic act, Private First Class Anderson saved his comrades from serious injury and possible death.”