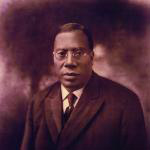 Tindley was born July 7, 1851 in Berlin, Maryland. At birth, Tindley’s father was enslaved, but his mother was free, therefore he was considered free. Tindley was primarily self-educated, but he did attend night courses and took correspondence courses as the Boston University School of Theology, eventually earning a doctorate while working as a church janitor.

Tindley became the pastor of that church, Calvery Methodist Episcopal Church, which under his leadership grew from 130 to a multi-racial congregation of 12,500. After serving the congregation for over 30 years, the church was renamed Tindley Temple United Methodist Church in 1924. Tindley was also a noted songwriter and composer of gospel hymns and his composition “I’ll Overcome Some Day” (1901) is considered by many to be the basis for the Civil Rights anthem “We Shall Overcome.”

Other compositions by Tindley include “Nothing Between” (1905), “Some Day” (1906), and “Leave It There” (1916). Tindley was the first hymn writer to have a hymn copyrighted and in 1916 he published a collection of hymns titled “New Songs of Paradise.”