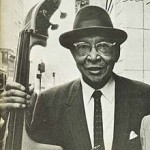 Foster was born May 19, 1892 in Ascension Parish, Louisiana. By 1907, Foster was playing professionally, working in bands such as King Oliver’s and Kid Ory’s. In 1929, he moved to New York City where he played with various bands, including Louis Armstrong’s.

In the late 1940s, Foster began touring more widely and played in many European countries. In the late 1950s and early 1960s, he played with Earl Hines’ Small Band. “The Autobiography of Pops Foster” was published in 1971.