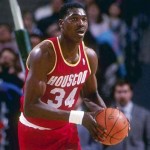 Olajuwon came to the United States to play basketball for the University of Houston where he had a standout career, including winning the 1983 NCAA Tournament Player of the Year Award.

He was selected by the Houston Rockets in the 1984 NBA Draft and over his 18 season professional career led them to two NBA championships. He also was a 12-time All-Star, 2-time Defensive Player of the Year, and in 1994 was the Most Valuable Player in the league. Olajuwon co-authored his autobiography, “Living the Dream: My Life and Basketball” in 1996.

He retired from basketball in 2002 and was inducted into the Naismith Memorial Basketball Hall of Fame in 2008. After retiring, Olajuwon has spent most of his time in Jordan pursuing Islamic studies. He has also had great success in the Houston real estate market, with estimated profits exceeding $100 million.