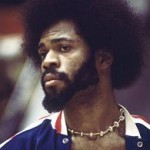 Gilmore played two years at Jacksonville University and led the team to the 1970 NCAA Division I championship game. He led the NCAA in rebounding both years and his career average of 22.7 rebounds per game is the highest in NCAA Division I history.

Over his 19 season professional career, he was an 11-time All-Star and still holds the NBA record for career field goal percentage. Gilmore was inducted into the Naismith Memorial Basketball Hall of Fame in 2011. Since 2007, he has served as special assistant to the president of Jacksonville University.