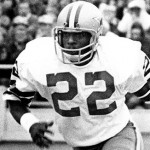 At that time, he was considered the world’s fastest man. Hayes was selected by the Dallas Cowboys in the 1964 NFL Draft. Over his 11 season professional football career, he was a three-time Pro Bowl selection and was instrumental in the Cowboys’ 1972 Super Bowl victory. Hayes is the only man to win an Olympic Gold medal and a Super Bowl ring and he was posthumously inducted into the Pro Football Hall of Fame in 2009.