By Chimsima Zuhri on May 8, 2011 in African American History, May, Sports 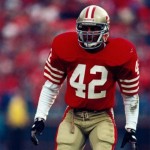 Lott player college football at the University of Southern California from 1977 to 1980 and in 1980 was a unanimous All-American. He graduated from USC in 1981 with a Bachelor of Arts degree in public administration. Lott was drafted by the San Francisco 49ers in the 1981 NFL draft and over his 14 professional seasons he was a ten-time Pro Bowl selection and four-time Super Bowl champion.