By Chimsima Zuhri on May 8, 2011 in African American History, May, Music 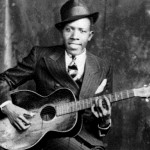 At a very young age, Johnson began traveling up and down the Delta as an itinerant musician. His landmark recordings from 1936 and 1937 display a remarkable combination of singing, guitar skills, and songwriting talent that have influenced generations of musicians.

His landmark recordings from 1936–1937 display a combination of singing, guitar skills, and songwriting talent that have influenced later generations of musicians. Johnson’s shadowy, poorly documented life and death at age 27 have given rise to much legend, including a Faustian myth. As an itinerant performer who played mostly on street corners, in juke joints, and at Saturday night dances, Johnson enjoyed little commercial success or public recognition in his lifetime.

His records sold poorly during his lifetime, and it was only after the first reissue of his recordings on LP in 1961 that his work reached a wider audience. Johnson is now recognized as a master of the blues, particularly of the Delta blues style. He is credited by many rock musicians as an important influence; Eric Clapton has called Johnson “the most important blues singer that ever lived”.

Johnson died August 16, 1938 and is considered to be the grandfather of rock and roll. He was ranked fifth in Rolling Stone’s list of 100 Greatest Guitarists of All Time. In 1986, Johnson was posthumously inducted into the Rock and Roll Hall of Fame, in 1994 the United States Postal Service issued a commemorative postage stamp in his honor, and in 2006 he received a Grammy Lifetime Achievement Award.