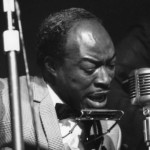 After spending several years performing in Mississippi, Reed moved to Chicago in 1943.

Reed died August 29, 1976 and was posthumously inducted into the Rock and Roll Hall of Fame in 1991.