By Chimsima Zuhri on February 8, 2011 in African American History, February 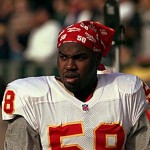 Thomas was born January 1, 1967 in Miami, Florida. He played college football at the University of Alabama. In 1988, he was named an All-American and won the Butkus Award as the best linebacker in college football.

Thomas was selected by the Kansas City Chiefs in the 1989 NFL Draft. Over his eleven season professional career, Thomas was a nine-time Pro Bowl selection, the 1989 Defensive Rookie of the Year, and the 1993 Walter Payton Man of the Year winner, in recognition of his volunteer and charity work, as well as his excellence on the field. In November, 1990, Thomas set the NFL record for most sacks in a game with seven.

In January, 2000, he was involved in an automobile accident that left him paralyzed from the chest down. Thomas was selected to the NFL 1990s All-Decade Team and in 2009 was posthumously inducted into the Pro Football Hall of Fame. The Derrick Thomas Academy, a charter school in Kansas City, Missouri, opened in September, 2002.