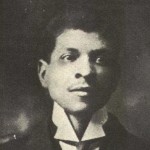 Richard Moore was born August 9, 1893 in Christ Church, Barbados. He moved with his family to the United States in 1909 and settled in Harlem, New York. Harlem introduced Moore to the realities of European colonialism in Africa and the Caribbean as well as the injustices of Jim Crow in the South. In 1915, he joined the 21st Assembly District Socialist Club in Harlem and by 1918 he was well known through his speeches on Black Nationalism and Marxism.

In 1920, Moore co-founded “The Emancipator,” a magazine devoted to Marxism as the liberating ideology for African Americans. In 1921, Moore became one of the first African Americans to join the American Communist Party. He remained a member until 1942 when he was expelled for promoting a Black Nationalist agenda. In 1942, Moore opened the Frederick Douglass Book Center which became well known for carrying rare texts on black people.

In 1960, Moore wrote “The Name Negro: Its Origin and Evil Use” which argued against the terms “Negro” and “colored” in referring to people of African descent and promoted the use of “Afro-American.” Moore’s biography, “Richard B. Moore: Caribbean Militant in Harlem,” was published in 1988.