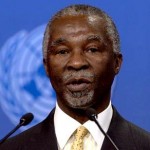 Both of Mbeki’s parents were teachers and activist and Mbeki describes himself as “born into the struggle.” In 1959, he was expelled from school for his involvement in student strikes and in 1961 he was elected secretary of the African Students Association.

In 1962, Mbeki went into exile in the United Kingdom and while there earned a Bachelor of Arts degree in economics and a master’s degree in African studies from the University of Sussex. He also received military training in the Soviet Union and lived at different times in Botswana, Swaziland, and Nigeria. In 1975, Mbeki became a member of the African National Congress National Executive Committee.

In 1984, he was appointed head of the ANC information department and became head of the international department in 1989. In that capacity, he led the ANC delegation in talks with the South African government that eventually resulted in the unbanning of the ANC and the release of political prisoners. In 1994, Mbeki was elected Deputy President and in 1999 he was elected President of South Africa, a position he held until 2008.

Mbeki has received many honorary degrees from South African and foreign universities and in 1997 was awarded the Good Governance Award by the Corporate Council on Africa.