By Chimsima Zuhri on March 21, 2011 in African American History, March 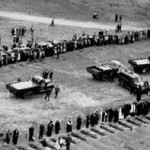 The black South Africans were organized by the Pan Africanist Congress to protest the pass laws which restricted the movement of blacks. When they converged on a local police station, the police opened fire killing and wounding most of the people in the back.

Sharpeville marked a turning point, South Africa was increasingly isolated in the international community and it was one of the catalysts for a shift from passive resistance to armed resistance by the PAC and the African National Congress. Annually, March 21 is commemorated as Human Rights Day in South Africa and the United Nations’ Educational, Scientific and Cultural Organization (UNESCO) recognizes the date as the annual International Day for the Elimination of Racial Discrimination.