By Chimsima Zuhri on September 21, 2010 in African American History, September 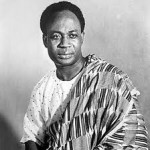 In 1935, Nkrumah came to the United States to further his education, earning a Bachelor of Arts in 1939 and a Bachelor of Sacred Theology in 1942 from Lincoln University and a Master’s of Science in 1942 and a Masters of Arts in Philosophy in 1943 from the University of Pennsylvania. In 1947, Nkrumah returned to the Gold Coast and became the leader of the United Gold Coast Convention which was working on independence from the British.

In 1950, the colonial administration arrested and sentenced Nkrumah to three years in jail for his political activities. As the result of international protests and internal resistance, Nkrumah was released from jail in 1951 and elected Prime Minister of the Gold Coast in 1952. In March, 1957, Nkrumah declared Ghana independent and in 1960 he was elected President. In February, 1966, Nkrumah’s government was overthrown in a military coup which was backed by the United States CIA and he went into exile in Guinea. He died April 27, 1972.

Nkrumah is best remembered for his strong commitment to and promotion of Pan-Africanism and his significant influence in the founding of the Organization of African Unity. In 2000, he was voted Arica’s Man of the Millennium by listeners of the BBC World Service. Nkrumah was a prolific author and published his autobiography, “Ghana: The Autobiography of Kwame Nkruman” in 1957. Other works by Nkrumah include “Africa Must Unite” (1963), “Dark Days in Ghana” (1968), and “Revolutionary Path”, published posthumously in 1973.