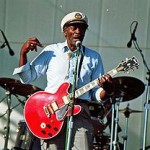 Berry made his first public performances while he was still in high school and by early 1953 was performing at popular clubs in East St. Louis, Illinois. In 1955, Berry recorded “Maybelene” which sold over a million copies and reached number 1 on the Billboard R&B chart and in 1956 his song “Roll Over Beethoven” reached number 29 on the Billboard Top 100 chart.

By the end of the 1950s Berry was an established star with several hit records and film appearances. After doing time in prison, Berry resumed recording and placed six singles on the Billboard charts during 1964 and 1965. In 1972, “My Ding-a-Ling” became Berry’s only number 1 single on the Billboard Hot 100 chart. In 1979, at the request of President Jimmy Carter, Berry performed at the White House. Today, Berry performs periodically.

Berry was presented the Grammy Lifetime Achievement Award in 1984, in the first class of musicians to be inducted into the Rock and Roll Hall of Fame in 1986, and received Kennedy Center Honors in 2000. In addition to “Maybelene” and “Roll Over Beethoven,” four other Berry recordings, “Brown Eyed Handsome Man” (1956), “Rock and Roll Music” (1957), “Johnny B. Goode” (1958), and “Sweet Little Sixteen” (1958), are listed on Rolling Stone’s 500 Greatest Songs of All Time. An eight-foot tall statue of Berry was unveiled in St. Louis in 2011.