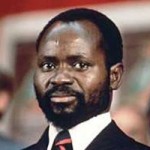 Machel was born September 29, 1933 in Gaza Province, Portuguese East Africa (Mozambique). In 1962, Machel joined the Front for the Liberation of Mozambique (FRELIMO) which was dedicated to creating an independent Mozambique. He received military training in other parts of Africa and returned in 1964 to lead FRELIMO’s first armed attack against the Portuguese.

By 1969, Machel had become commander-in-chief of the FRELIMO army. When Mozambique gained its independence in 1975, Machel became its first president and served until his death. A memorial at the site of the crash was inaugurated in 1999. Machel’s biography, “Samora Machel: An African Revolutionary,” was published in 1985.