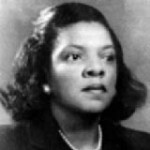 October 19, 1979 Marjorie Lee Browne, educator and one of the first African American women to earn a doctorate in mathematics, died.

In 1960, she wrote a grant that resulted in the IBM Corporation providing NCCU with a computer, one of the first computers in academic computing. Browne also established summer institutes to provide continuing education in mathematics for high school teachers and in 1974 was the first recipient of the W.W. Rankin Memorial Award for Excellence in Mathematics Education. In 2001, the University of Michigan established the Marjorie Lee Browne Colloquium and NCCU annually offers the Marjorie Lee Brown Scholarship to students majoring in mathematics.