By Chimsima Zuhri on August 23, 2011 in African American History, August 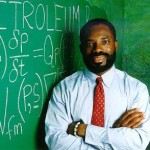 In 1989, he was one of two winners of the Gordon Bell Prize, considered the Nobel Prize of computing, for his use of the Connection Machine supercomputer. That machine consisted of over 65,000 parallel processors to help analyze petroleum fields. Emeagwali earned a Ph. D. in scientific computing from the University of Michigan in 1993.

He has received numerous other awards and recognitions and was voted the greatest African scientist of all-time in a survey by New African magazine.