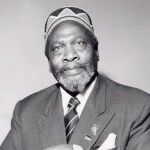 Kenyatta was born in the village of Ngende, Gatundu, in British East Africa (now Kenya) in the early to mid-1890s. No formal birth records of native Africans were kept at that time. In 1929, Kenyatta moved to Europe for education and work. In 1946, he returned to Kenya and in 1947 was elected president of the Kenya African Union.

In 1951, the Mau Mau rebellion began and the British declared a state of emergency. Kenyatta was convicted and sentenced to 7 years of hard labor for managing and being a member of the Mau Mau Society. In 1961, he was released and in 1963 elected Prime Minister of the Kenyan government. On June 1, 1964, Kenya became an independent republic with Kenyatta as president. He remained president until his death.

Kenyatta also authored a number of books, including “Facing Mount Kenya” (1938), “Kenya: The Land of Conflict” (1971), and his autobiography, “Suffering Without Bitterness” (1968). A number of streets, schools, hospitals and other institutions in Kenya bear his name, including Nairobi’s Jomo Kenyatta International Airport. Kenya observes a public holiday every October 20 in his honor.